In the video, Stevens Point Wisconsin City Arborist Paul Ziemann inspects an Elm tree suspected of having Dutch Elm disease. He explains the history of the disease, what you can do to help preserve Elm trees, and the process of condemning and ultimately removing a diseased tree.

History of DED in Stevens Point

During the 1960s and 1970s, Stevens Point, like most Midwestern cities, had its American elm trees nearly wiped out by Dutch elm disease (DED), Ophiostoma ulmi. Due to some forward thinking, the city took an aggressive approach to the problem and implemented a strict sanitation program to try to control the effects of the disease. This sanitation program is still in effect today, and as a result, Stevens Point still has a fair number of large American elms left.

How we Discover DED in a Tree

Every year, the city forestry department conducts a tree survey, where a forestry department crew travels every street in Stevens Point looking for several things, the two most notable being obstructed street signs and elms showing symptoms of Dutch elm disease. After the survey, street signs are cleared and trees suspected of having DED are examined. Both public and privately-owned trees are examined. If it is determined that a tree has DED, it must then be decided if the tree can be saved, or if it has to be condemned.

The recent outbreak of DED is due in part to the cool and wet weather we had this Spring and early Summer. Cool, wet weather is optimal for fungus growth, and Dutch elm disease is caused by a fungus that plugs the vascular system of the tree. The vascular system is responsible for transporting water through the tree. If the system is plugged, and the tree can not get water, the leaves turn yellow and the tree eventually dies. Dutch elm disease is spread primarily in one of two ways. The first is overland spread by beetles. There are two types of beetles that feed in the crotches of young twigs of elms. As they feed, the fungus that causes the disease is on their bodies, and the disease is introduced to the tree. This is why the first symptoms usually show up in the upper crown of the tree. The second way is through root grafts. Elm tree roots sometimes fuse together with roots of another elm tree they are close to. When one of the elms contracts the disease, it is possible for the disease to transfer to the neighboring elm through the roots. 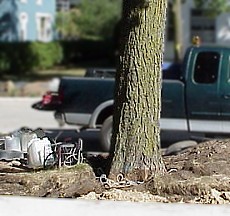 The yellowing of the leaves of an infected elm is called "flagging" and is one of the first symptoms to appear. If residents notice a yellowing branch in their elm tree - primarily in June, July, and August - they should notify the Stevens Point forestry department or call a tree care company to take a look at the tree. If caught early, Dutch elm disease can be either pruned out and/or chemically treated. If nothing is done, the disease will not go away, and the tree will surely die. Trees can be injected with a fungicide to try and cure the disease. Elms can also be injected with the same fungicide as a preventive measure. The treatment is usually good for three years. Once you notice "flagging" in your elm tree, it is important to act fast! Even though a tree may be pruned or treated with a fungicide, there is no guarantee that an infected tree can be saved.

How we Stop DED

City residents might have noticed a few elm trees in the boulevard that have an orange dot on them and are also "girdled," meaning we have removed a band of bark and the wood just beyond the bark, about six inches wide, all the way around the tree. This is done on a limited basis. These trees had Dutch elm disease. It was decided that they were too far gone to prune out the disease or inject them, but it was thought that the disease had not yet entered the root system of the tree. We hope to stop the disease in the tree before it enters the root system of the tree. This is important because there are other elms next to the infected trees, and our desire is to prevent the disease from being passed on to the neighboring elms through their roots. There are times when girdling a tree is not advisable.

If an elm has been determined to have DED and can not be saved, it is condemned. The forestry department then marks the elm with an orange dot and notifies the landowner they must remove the tree. The city only removes elms that are growing on city-owned land. It is important to remove infected trees quickly. Removing diseased elms quickly limits the breeding sites of the beetles that spread the disease. The beetles that spread the disease are attracted to infected trees.

Removing diseased trees quickly may also prevent root graft spread of the disease to neighboring elms. To prevent root graft spread of DED, it is best to cut the roots between a diseased tree and a healthy tree to a depth of five feet, and then remove the diseased tree. A tree care professional should be contacted for this procedure. It is important to place the root-cutting trench in the right place, as well as making sure the remaining tree has a sufficient root system for stability. Diggers Hotline should also be contacted before such work!

What You Can Do

If residents are informed about what to look for, and if they remove and/or prune their diseased elms in a timely fashion, and they keep the remaining elms healthy, Stevens Point should be able to continue to enjoy the beauty of the American Elm.

For information on injecting your elm to prevent your tree from getting DED, or if you have any other questions, you can call the City of Stevens Point Forestry Dept. at 346-1532, or contact your tree care professional.

Departments
Agendas, Minutes, Videos
Payments
Property Search
How Do I?
Search this Site