StevensPoint.com Honored by International Academy of the Visual Arts 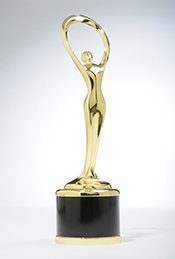 Founded over a decade ago, the Communicator Awards receives over 9,000 entries from companies and agencies of all sizes, making it one of the largest awards of its kind in the world. The Communicator Awards provides an equal chance of winning to all entrants regardless of company or agency size and project budget.

The Award of Excellence, the Communications Awards' highest honor, is given to those entries whose ability to communicate puts them among the best in the field.

The Communicator Awards is sanctioned and judged by the International Academy of the Visual Arts, an invitation-only body consisting of top-tier professionals from a "Who's Who" of acclaimed media, communications, advertising, creative and marketing firms. IAVA members include executives from organizations such as Disney, The Ellen DeGeneres Show, Estee Lauder, HBO, Monster.com, MTV, Polo Ralph Lauren, Sotheby's Institute of Art, Wired, Yahoo! and others.

The Stevens Point website's new design was developed over a course of several months in 2010 by the City's website manager and CivicPlus, the national leader in open government technology. CivicPlus entered 11 of its clients' websites into the Communicators Awards this year. Six of those websites won Silver Awards of Distinction, and the City of Stevens Point's website won the Gold Award of Excellence. Entries are scored on a ten point scale by the judges. Generally, Excellence Winners receive a score of 9.0 or above and Distinction Winners receive a score of 7.0 to 8.9.

Departments
Agendas, Minutes, Videos
Payments
Property Search
How Do I?
Search this Site